Looking For A Trusted DHM Supplement?

For as long as people have been consuming alcoholic beverages, they’ve been looking for a way to stave off its after-effects. That means, of course, hangovers. Though there might be as many folk remedies as there are types of wine, DHM or Dihydromyricetin is one substance that really works. 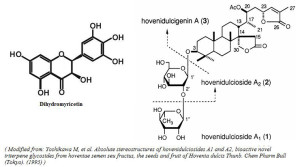 Other names for DHM (dihydromyricetin) are ampeloptin or ampelopsin. It also, of course, goes by the commercial name of Sobur.

The most effective kind of DHM comes from the bark of the Himalayan cedar tree, which is found in the south of China and parts of Tibet, Nepal, India, Pakistan and Afghanistan. It’s an alpine tree that can grow to nearly 200 feet tall. It has many useful purposes. Among them are incense, insect repellent, preservative and fungicide. Its timber is also used in construction.

DHM works by reducing the amount of GABA, a neurotransmitter that’s found in the brain. An excess of GABA causes the symptoms of intoxication. DHM is also hepatoprotective, which means that it protects the liver. This is the organ through which alcohol is metabolized and which can suffer damage from excessive alcohol consumption.

Studies conducted on rats show that they recover from the effects of intoxication much more quickly than rats who weren’t given DHM. The drug also reduced the rats’ craving for alcohol. When human studies were conducted, the subjects were given 150 mg of DHM after consuming an alcoholic beverage. Again, the test subjects sobered up quickly after they had the dosage of DHM.

Researchers are now looking into DHM to see if it works as a treatment for alcoholism.

We created this slideshow to delve a bit deeper into DHM, check it out:

Dihydromyricetin – Curing mice of their hangovers since 1997 from Sobur

Where to Buy DHM

Sobur, which contains DHM, is an excellent hangover cure. It also has N-Acetyl L-Carnitine, which helps to support liver function, Vitamin C, which is an antioxidant and B complex vitamins, which support the health of the nervous system. Sobur has shown itself to be safe and effective when taken properly.